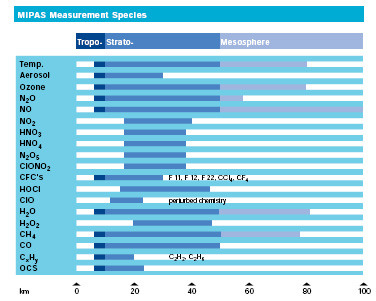 MIPAS was a high-resolution Fourier Transform Infrared spectrometer which was designed to measure concentration profiles of various atmospheric constituents on a global scale. Designed as a high-resolution limb sounder, it provided detailed insights into the chemistry of the atmosphere by observing emission spectra in the near to mid-infrared. This information enhanced studies of the composition, dynamics and radiation balance of the middle atmosphere (stratosphere+mesosphere) and the upper part of the troposphere.

The atmosphere at the Earth's limb was observed by MIPAS covering a possible altitude range from 5 km to 150 km with a vertical resolution of about 3 km. MIPAS was enabled to retrieve vertical trace gas profiles of over 20 species day and night. Global coverage was obtained within 3 days. As one of the atmospheric instruments on Envisat, MIPAS complemented information obtained by SCIAMACHY, GOMOS and MERIS.

These data contributed to the development of a better understanding in the following research areas: 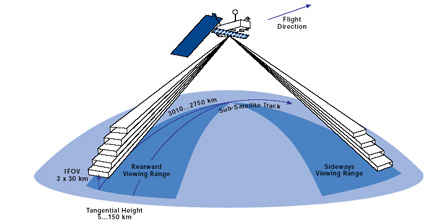 The MIPAS instrument was designed to allow the simultaneous measurement of more than 20 relevant trace gases, including the complete NOy family and several CFCs. The atmospheric temperature as well as the distribution of aerosol particles, tropospheric cirrus clouds and stratospheric ice clouds (including Polar Stratospheric Clouds) are further important parameters which were derived from MIPAS observations.

The data was obtained with complete global coverage, for all seasons and independent of illumination conditions, allowing measurement of the diurnal variation of trace species.

The atmospheric emissions were measured at the horizon of the Earth (limb) over a height range of 5 to 150 km. This observation geometry allowed the maximum measurement sensitivity and a good profiling capability to be achieved.

The MIPAS data products are calibrated high-resolution spectra which were derived on ground from the transmitted interferograms. From these spectra, geophysical parameters such as trace gas concentrations, temperature profiles, mixing ratios, were retrieved, enabling the creation of global maps of atmospheric constituents in geophysical coordinates.

MIPAS performed measurements in either of two pointing regimes: rearwards within a 35° wide viewing range in the anti-flight direction and sideways within a 30° wide range on the anti-sun side. The rearward viewing range was used for most measurements, since it provided a good Earth coverage including the polar regions.

The sideways range was important for observations of special events, like volcano eruptions, trace gas concentrations above major traffic routes or concentration gradients across the dawn/dusk border. In nominal measurement mode, MIPAS performed some series of measurements at different tangent heights by performing elevation scan sequences with a duration of 75 seconds in the rearward viewing range. Such an elevation scan sequence comprised typically 16 interferometers sweeps.

Another calibration was required for the inflight determination of the line of-sight pointing direction, which was based on the observation of stars crossing the instrument field of view and subsequent correlation of the actual with the predicted time of star crossing.

The MIPAS block diagram depicted the functional elements and their relationship. The radiation emitted from the observed scene entered MIPAS through the Front-End Optics comprising an azimuth scan mirror, an elevation scan mirror and a telescope. The radiation propagated through a dual slide, dual port Michelson-type interferometer, which was designed to provide an unapodized spectral resolution of better than 0.035 cm-1 throughout the observed spectral range.

The input signals were divided at the beamsplitter inside the interferometer and directed to cube corners moving at a constant velocity of 25 mm/s along a path of 100 mm. Hence one spectrum was typically recorded within 4 seconds. From the cube corners the IR beam is reflected to the beam recombiner and then directed to the output ports.

After optical filtering the input spectrum was separated into eight narrow spectral bands for detection by eight Hg:Cd:Te-detectors operating at about 70K.

After pre-amplification, the eight signals were amplified, lowpass filtered and digitised by the analogue processing part of the Signal Processing Electronics. Its digital part separated the spectral range of interest by complex filtering, under sampled the input sequences individually and equalised channels combined.

Word length truncation was then performed to reduce the data rate for downlink budget reasons. In a final processing step, measurement data was multiplexed and formatted to source packets. On ground, the incoming source packets were sorted according to measurement/calibration data and the interferograms are converted into calibrated spectra.

The MIPAS acquisition baseline was defined by a Science Team in the MIPAS Mission Plan Rationale, and was regularly revised during the mission in order to adapt the measuring scenario to scientific requirements, such as special operations in support to calibration/validation campaigns or special events. Different measurements modes were thus implemented.

In addition, the Interferometer Drive Unit major anomaly in 2004, required the acquisition scenarios and the mission target itself to be modified. Download the MIPAS Mission Plan document for more information.

Download the history of the MIPAS planned observations on a yearly basis:

The MIPAS instrument was operational for ten years, from 1 March 2002 until 8 April 2012. In 2004, it suffered a major anomaly affecting the Interferometer Drive Unit (IDU), which had a serious impact on performance. To avoid problems, ESA took the decision to interrupt MIPAS regular operations on 26 March 2004. Different tests with different slide configurations, and spectral resolutions were carried out to identify the source of the trouble and to try to recover and restore MIPAS to full operational capacity. Despite such a serious problem, ESA succeeded in recovering the instrument in January 2005, after only a few months of tests.

MIPAS was operated at 100% from July 2002 to March 2004. Due to the instrument anomaly, it was operated at a reduced capacity (about 30% at the beginning of 2005 and progressively increased) until December 2007, when it was successfully recovered back to 100%, three and a half years since the first failure. The reduced operational capacity had a direct consequence on the overall number of acquisitions acquired by MIPAS in the different periods. The acquisition scenarios had to be modified and the instrument was completely re-characterised.

Different phases can be therefore identified for the MIPAS mission, characterised by a different spectral resolution and a different limb scanning pattern with different vertical and horizontal sampling: