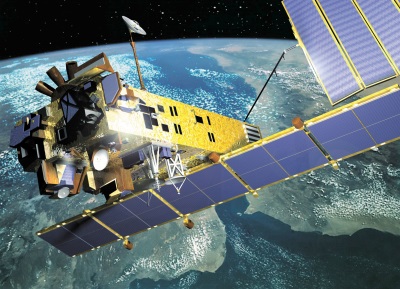 On the ground, Envisat DORIS data was used to create precise orbit reconstruction models which were then used for all satellite instruments requiring precise orbit position information. In addition, DORIS operated in a Navigator mode in which on-board positioning calculations were performed in real-time and relayed to the ground segment. Envisat was launched in 2002 and ended on 8 April 2012, following the unexpected loss of contact with the satellite.

The primary application of DORIS was in support of orbit determination providing data of the satellite orbit with an accuracy in the order of centimetres and it shared the applications which made use of this orbit, principally from the RA-2 instrument.

The dual-frequency DORIS system enabled estimations of the total amount of free electrons in the ionosphere. Such data formed a separate data product.

DORIS was based upon the accurate measurement of the Doppler shift of radio frequency signals transmitted from ground beacons and received on board the spacecraft. Measurements were made at two frequencies: 2.03625 GHz for precise Doppler measurements and at 401.25 MHz for ionospheric correction of the propagation delay. The 401.25 MHz frequency was also used for measurement time-tagging and auxiliary data transmission. On-board measurements of the Doppler shift were performed every 10 seconds. Resulting radial velocity values (accuracy of the order of 0.4mm/s) were used on the ground in combination with a dynamic model of the satellite trajectory to perform a precise orbit determination with an accuracy of better than 5 cm in altitude.

These orbit data were available with a time lag of one and a half months, where the delay was mainly due to the availability of external data, such as solar flux. The Doppler measurements were also processed on board to obtain real time orbit data with less accuracy. The selection of an uplink-only system allowed fully automated operation of the beacons and easy communication links for the overall system, data being centralised through the satellite and its ground segment to the DORIS data processing centre.

The DORIS instrument consisted of: 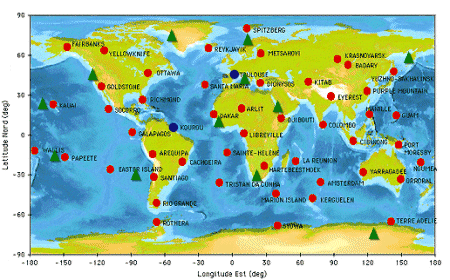 To perform its missions of spacecraft orbit restitution and of ground beacon locations, the DORIS system consisted of an on-board package, a beacon network, and the DORIS Control and Data Processing Centre. For operational aspects, the DORIS control centre provided an interface to the spacecraft flight operation segment. The orbit determination beacons were deployed on a dense worldwide network. There were about 50 ground beacons placed around the globe which covered about 75% of the Envisat orbit. Installation and maintenance of the network was performed by the IGN (French national geographic institute). The time reference for the system was provided by the master beacons, located in Toulouse, France, and in Kourou, French Guiana, which are connected to atomic clock.

For the point positioning mission of DORIS, specific ground location beacons were available and are installed according to different users need. They were field packaged and equipped with an autonomous power supply. The control and data processing center was located in Toulouse, France, and operated by the CLS company.

The ground segment consisted of:

The location of the orbit determination beacons (ODB) was precisely linked to an international reference frame to get absolute positioning. Each ODB consisted of:

An ODB signal carried the beacon ID, meteorological data and information concerning the beacon operation status. The complete message lasted 0.8 seconds and was repeated once every 10 seconds.

A second class of beacons were termed "ground location beacons" (GLB), referring to positions that were either unknown or not known to sufficient accuracy. GLB's used the result of high-precision orbit determination as input for the precise determination of ground positions. They were functionally equivalent to ODB's. Each GLB transmitted independently for 10 seconds, once, twice or three times every minute, when the satellite was in range.

The master beacon (MB) was the link between DCC and the on-board package. On each pass the DCC transmitted data and instructions for on-board programming.

Download the list of major events that affected the RA-2, MWR and DORIS instruments during the Envisat mission lifetime.