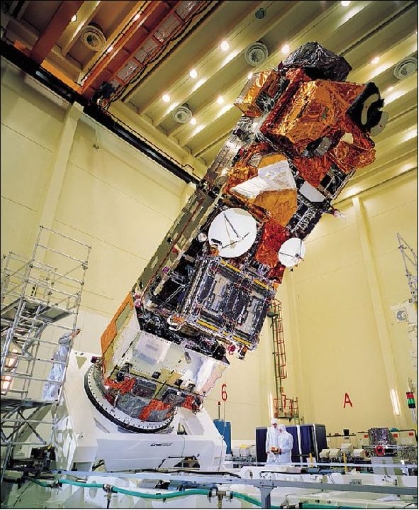 The Envisat satellite had an ambitious and innovative payload that ensured the continuity of the data measurements of the ESA ERS satellites. Envisat data supported Earth science research and allowed monitoring of the evolution of environmental and climatic changes. Furthermore, the data facilitated the development of operational and commercial applications. Together with its predecessors, ERS-1 and ERS-2, the Envisat mission deeply contributed to expanding our knowledge in the Earth sciences and to develop operational applications related to environmental monitoring.

The PPF development activities started in 1990, following the selection of the Polar Platform as a derivative of SPOT 4, by the ESA council. An industrial proposal was submitted and evaluated at the end of 1990 and implemented starting in early 1991. Since then, the following major external programmatic events took place:

Final industry negotiations were completed in mid-1995 and the PPF phase C/D contract for the development and integration of the Polar Platform with the Envisat instruments was signed in July 1995.

The mission and development of the payload instruments for Envisat started after the split of POEM-1 into Envisat and MetOp-1 at the Ministerial ESA council meeting in December 1993.

The eight-tonne satellite orbited Earth more than 50,000 times over 10 years – twice its planned lifetime. The mission delivered thousands of images and a wealth of data used to study the workings of the Earth system, including insights into factors contributing to climate change.

The Envisat mission is summarised in this infographic: 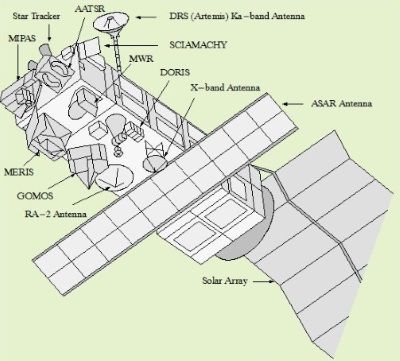 The major driver for the Polar Platform/Envisat satellite configuration was the need to maximise the payload instrument mounting area and to meet the viewing requirements within the constraints of the Ariane 5 fairing and interfaces. Additionally, the configuration was also driven by the reuse of the SPOT Mk II service module concept and the ERS payload accommodation experience (the concept of instrument electronics in an internal enclosure with externally mounted antennas). The in-flight configuration concept provided a large, modular, Earth-facing mounting surface for payload instruments and an anti-sun face for radiative coolers, free of occultation by satellite subsystem equipment.

The Polar Platform (PPF) represented, with its payload, the largest European satellite undertaken so far. It was conceived as a multimission platform which could accommodate a number of different missions. The Polar Platform was comprised of two major modules:

This split provided the basis for a convenient physical and functional separation between the SM subsystems and equipment which were needed for every mission, and those in the PLM which were mission-specific and therefore dedicated only to the needs of the particular payload complement being flown. In addition, the interface decoupling at module level facilitated parallel development and integration of service and payload modules, and allowed for a schedule-efficient satellite integration programme where only the minimum of system level activities was needed for final verification. A structural model programme had been performed with both modules coupled and representative instrument models also included.

Main Technical Characteristics of the SSR's

The two SSR's allowed parallel recording of the low rate global data with MERIS FR or ASAR HR data. For each SSR, the three memory areas could be dumped separately at either 100 Mbps or 50 Mbps (half RF channel) via the X-band or Ka-band RF channels.

The recording capacity of a solid state recorder (SSR) degraded from 70 Gbits at beginning of lifetime (BOL) to 60 Gbits at the end of lifetime (EOL). The memory was partitioned dynamically in three areas, one per input-data stream, which allowed the allocation of capacity according to the needs per input. Dummy source packets (filling data) were removed before recording, allowing more efficient use of the capacity: recording of 9,000 seconds of global low bit rate (LBR) within 30 Gbits of SSR memory.

All input and output data channels of the SSR were equipped with redundant interfaces.

There was only one tape recorder (TR) onboard Envisat capable of recording the low-rate global data.

The recorder was capable of recording up to 6500 seconds, which was slightly more than one full orbit of LR data recording.

The TR playback dump was performed at 50 Mbps (half-RF channel) via X- or Ka-band links.

The full TR dump (10 minutes duration) was compatible with the nominal pass visibility duration of an X-band receiving station.

Each of the three memory areas could be separately controlled with respect to data dump time and data rate.

In the nominal scenario, one SSR was used for the global mission, for low rate data recording. The second SSR was used for the regional mission (ASAR HR and MERIS FR), with data dump via ARTEMIS to the user Earth terminal (UET). Note that 30 Gbits memory allowed five minutes of ASAR HR, equivalent to a stripe 2,000 km long, or 20 minutes of MERIS full resolution recording. 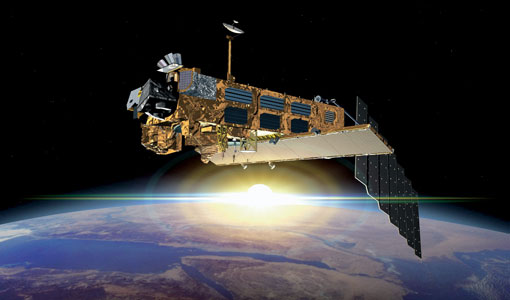 Envisat flew in a sun-synchronous polar orbit of about 800 km altitude. The repeat cycle of the reference orbit was 35 days, and for most sensors, being wide swath, it provided a complete coverage of the globe within one to three days. The exceptions were the profiling instruments MWR and RA-2 which did not provide real global coverage, but spanned a tight grid of measurements over the globe. This grid was the same 35-day repeat pattern which had been well established by ERS-1 and ERS-2.

In order to ensure an efficient and optimum use of the system resources and to guarantee the achievement of the mission objectives Envisat reference mission operation profiles were established and used for mission and system analyses to define the instrument operational strategies, the command and control, and the data transmission, processing and distribution scenarios.

Envisat data was acquired worldwide and down-linked to acquisition stations either directly from the satellite or via the ARTEMIS (Advanced Relay and TEchnology MIssion Satellite). The data transmitted was either Real Time instrument data or otherwise data stored using on-board recorders until inside the visibility of a ground station.

The main ESA acquisition stations were located at ESRIN (Italy), for data transmitted via ARTEMIS and at Kiruna (Sweden). Svalbard was initially used to acquire all non-Kiruna passes until ARTEMIS became operational for Envisat data transmission (2003). After that Svalbard was used as a backup.

The factors that were considered for the selection of the orbit for each instrument included:

Some of these factors were fundamental and had an impact on the overall concept of the system. In particular, the selection of a sun-synchronous orbit was of primary importance and drove the physical configuration of the spacecraft. The gross altitude range, within some tens of kilometres of 800 km, was also critical to the design. After that, there was a certain degree of freedom in the choice of parameters. Many of the choices were examined during the ERS-1 mission preparation and the concept of the multidisciplinary orbit, with a 35-day cycle, evolved. Envisat flew this same high-inclination, sun-synchronous, near-circular orbit with the same ground track. The only difference was in the MLST being 10:00 instead of 10:30.

Low-rate data was systematically processed on the ground and disseminated to users in near real time (NRT). NRT users registered as "subscribing" users for the systematic reception of these products. All data was reprocessed offline. Nominal offline distribution was performed on physical media to registered users. Small products were available for retrieval on line, with the possibility for users to extract partial data sets.

The regional mission included the full-resolution mode of MERIS and all modes of the ASAR, with the exception of the wave mode. The following sections provide the basic concepts ruling the operations of the regional mission. 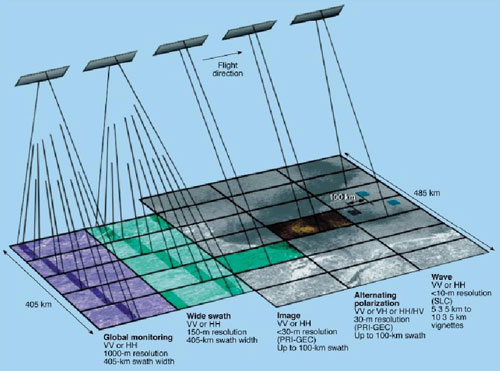 ASAR offered, by exploiting the combinations of polarisations and incidence angles, 37 different and mutually exclusive operating modes in high-, medium- (wide swath mode), and reduced- (global monitoring mode) resolution. These modes were operated mainly in response to user requests. Wave mode was also mutually exclusive with respect to all the other modes. It was a low-rate mode operated systematically over oceans as part of the global mission. The global mission operation strategy was intended to provide the maximum coverage of the Earth components (atmosphere, ocean, ice, land) relevant to each payload instrument. This was based on:

Global monitoring and wave modes were recorded systematically when operated. ASAR high- and medium-resolution imaging modes were either transmitted on a real time link (direct X-band or via ARTEMIS Ka-band link) or recorded on the on-board solid state recorder for ground data recovery. The high- and medium-resolution data were acquired only when required to satisfy either a background mission scenario and/or user requests.

MERIS FR was either transmitted on a real time link (direct X-band or via ARTEMIS Ka-band link) or recorded on the on-board solid state recorder for ground data recovery. The FR data was acquired only when required to satisfy either a background mission scenario and/or user requests. MERIS was nominally operated with a fixed set of bands. Alternative band sets were used for experiment campaigns of a few weeks duration.

MERIS RR data acquired at ESA facilities was systematically processed in near real time to generate MERIS RR Level 1b and 2 products. Browse products were made available on-line.

Upon user request MERIS FR data was processed and distributed either in near real time (dissemination link) or off-line (physical media).

For operation and data recovery of ASAR high- and medium-resolution data and MERIS full resolution, the following nominal strategy was applied:

In case of unavailability of ARTEMIS, whether temporary or permanent, the regional mission data acquisition was not affected. The time required to recover the data could restrict in some orbits the provision of three hour NRT services, but still preserved potential delivery of products to users within less than a day for data acquired over any site in the world.

The down link RF channel relaying the LR global data was be operated only when in visibility of ESA stations or ARTEMIS for dump of the recorded data. This measure needed to be taken to preserve satellite energy and lifetime of the corresponding on board transmitter.

The global mission operation included all Envisat instruments which had global coverage objectives and implied:

Data recovery assumed combined use of:

Simultaneous operation of Ka- and X-band channels was possible.

Envisat had three main mission phases and an extension in 2010:

At the end of October 2010 a major change in the orbital parameters was performed to extend the Envisat mission.

The End of Envisat Mission

After 10 years of service, exceeding its initially planned life span by five years and delivering over a petabyte of data, ESA announced they lost contact with Envisat on 8 April 2012. The spacecraft was still in a stable orbit, but it could not be contacted. Engineers spent a month attempting to regain contact with the satellite but Envisat did not respond to any commands.

The satellite had been operating with no signs of malfunction before 8 April, leading the engineers to wonder if the satellite had suffered external damage. The Pleiades satellite was used to acquire an image of Envisat, helping the team understand more about the spacecraft condition but not providing a definitive answer.

The possible failures included the loss of the power regulator, which would block telemetry and telecommands. Another possibility was a short circuit which may have trigged the satellite entering safe mode. Engineers also wondered if the satellite could have experienced another anomaly during a transition to safe mode, leaving Envisat in an intermediate and unknown condition.

ESA formally announced the end of Envisat's mission on 9 May 2012.

Read more about the end of the Envisat mission in this related news.