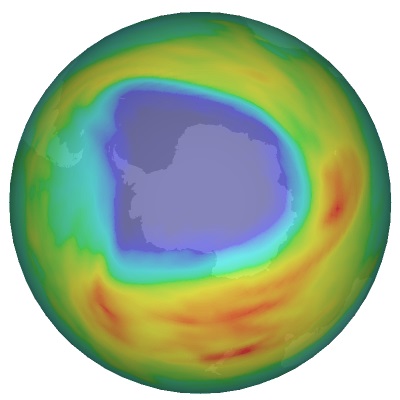 The primary scientific objective of Envisat's SCIAMACHY instrument was the global measurement of various trace gases in the troposphere and stratosphere, which were retrieved from the instrument observations of transmitted, back scattered and reflected radiation from the atmosphere in the wavelength range between 240 nm and 2400 nm. The high resolution and the wide wavelength range made it possible to detect many different trace gases despite low atmospheric concentrations (the mixing ratios of most constituents were of the order of 10-6 or less).

SCIAMACHY was conceived to improve our global knowledge and understanding of a variety of issues of importance for the chemistry and physics of the atmosphere (troposphere, stratosphere and mesosphere) and potential changes resulting from either anthropogenic effects or natural phenomena such as:

The instrument had three different viewing geometries: nadir, limb, and sun/moon occultations which yielded total column values as well as distribution profiles in the stratosphere and (in some cases) the troposphere for trace gases and aerosols.

The SCIAMACHY Product Handbook provides very good insight on the SCIAMACHY principles and mission. It contains also a section dedicated to FAQs for SCIAMACHY.

SCIAMACHY was an imaging spectrometer consisting of a mirror system, a sun diffusor, a telescope, a spectrometer, a calibration unit and thermal and electronic subsystems. SCIAMACHY performed measurements in nadir, limb, and solar/lunar occultation geometries. From these measurements, total column amounts and stratospheric profiles of a multitude of atmospheric constituents were retrieved on a global scale. The observations of trace gases were performed simultaneously and globally. Limitations occurred on the night side of the orbit (eclipse mode), where the sun did not illuminate the atmosphere and, consequently, no reflected and backscattered solar radiation could be measured. In this mode, a sequence of eclipse observations (e.g. for air glow, biomass burning determinations) were achieved. Global coverage was obtained in three days.

The measurements obtained from SCIAMACHY enabled the investigation of a wide range of phenomena which influence atmospheric chemistry:

In order to achieve the scientific objectives, measurements were performed by observing the atmosphere under different viewing angles. In Nadir Mode, the global distribution (total column values) of the atmospheric trace gases and aerosols could be observed. Additionally, cloud measurements were obtained. In this mode, the instrument was scanning across-track, with a swath width of ±500 km with respect to the subsatellite track.

To obtain the altitude distribution of trace gases, SCIAMACHY performed observations in limb over an altitude range of 100 km, with a vertical resolution of 3 km. Starting at Earth horizon, the atmosphere was scanned tangentially over a 1000 km wide swath. After each azimuth scan, the elevation was increased until the maximum altitude of 100 km was reached.

Differential Optical Absorption Spectroscopy was applied in sun and moon occultation measurements, where sun or moon were either tracked or a vertical scan over the complete sun/moon surface were performed. The obtained spectra could then be compared with suitable calibration spectra to yield the differential absorption of the atmosphere.

In the SCIAMACHY optical assembly, the light from the atmosphere was fed by the scanner unit consisting of an azimuth and an elevation scanner into the telescope which directed it onto the entrance slit of the spectrometer. The spectrometer contained a pre-disperser which separated the light into three spectral bands followed by a series of dichroïc mirrors which further divided the light into a total of eight channels.

A grating was located in each channel to diffract the light into a high resolution spectrum which was then focused onto eight detectors. The pre-disperser also served as a Brewster window to separate polarised light, a part of which was sensed by the Polarisation Measurement Device (PMD). The output of the PMD was later used to correct for the polarisation effects. Light reflected off the slit was directed to the Sun-Follower which controled the scan mirrors in the Sun and Moon Occultation mode.

Each spectrometer channel was equipped with a Detector Module consisting of the detectors and their Detector Module Electronics (DME). Each DME controlled its associated detector, read out the integrated charge, amplified the analogue signal and then digitised the signal. The digital signal of each channel was transferred to the Science Data Processing Unit (SDPU)

The TBU was built up from two cryogenic heatpipes which cooled the two IR-detectors. A tube shaped shroud, which enveloped the cryogenic heatpipes, transported the heat load from the detectors of the other six channels. The SDPU controlled the DME, acquired and processed science and auxiliary data and transmitted them to the spacecraft measurement data interface. The Instrument Control Unit received the macrocommands from the spacecaft, performed autonomously the overall management and control of the instrument and fed back telemetry information.

The Power, Mechanism and Thermal Control Unit (PMTC) provided secondary power to all equipment and controlled the scanners (via the Encoder Electronics), the different mechanisms, the calibration source and the temperature of the optical bench and the detectors. Furthermore the PMTC acquired analogue housekeeping signals indicating the health and status of the instrument. 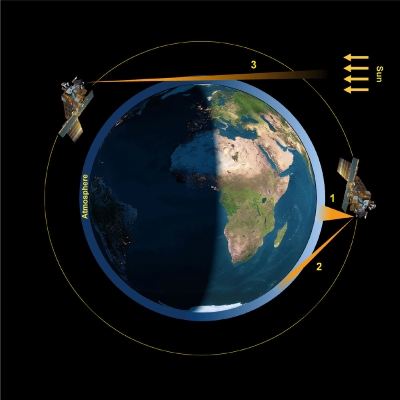 A routine SCIAMACHY orbit started above the northern hemisphere with the observation of the rising sun. A sequence of limb measurements preceded each sun occultation measurement. Then, a series of geographically matched limb/nadir observations were executed in the sun illuminated part of the SCIAMACHY orbit. Above the southern hemisphere, moon occultation measurements were executed during the monthly moon visibility period. When Envisat entered the eclipsed part of the orbit, dedicated eclipse observations were executed until SCIAMACHY moved towards another sunrise and the orbit sequence started again. Details on the planned instrument activities can be found on the SOST web page.

Scientific measurements were achieved in the following modes, depicted in the image:

The SCIAMACHY instrument operated continuously throughout the Envisat mission, from 1 March 2002 until 8 April 2012, without experiencing any major anomalies. Operations, in the main, had nominal planning. Several events occurred affecting operations and performance, but the effects on the resulting data were in general nominal with limited periods of reduced quality, during recovery from decontaminations or anomalies.