The Laser Retro-Reflector (LRR) aboard the ERS missions was used as a reflector by ground-based satellite laser ranging (SLR) stations using high-power pulsed lasers. Tracking using the LRR was principally accomplished by the International Laser Ranging Service (ILRS). The ILRS provided tracking for the satellite from its global network of laser ranging stations. Laser stations fired short laser bursts at the ERS-1 and ERS-2 satellites and timed the interval before the pulse was reflected back. The ILRS stations were relatively few, but because their position was very accurately known, they provided a set of independent reference measurements of ERS-1 and ERS-2's position, which contributed to the satellite's precise orbit determination.

The principle operating purpose of the LRR was to measure on the ground the time of a round trip of laser pulses reflected from an array of corner cubes mounted on the Earth-facing side of the satellite. The corner cubes ensured that the laser beam was reflected back parallel to the incident beam. 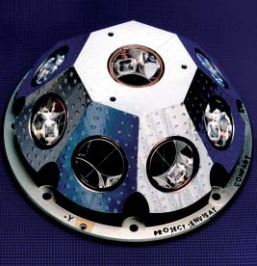 The corner-cubes, made of the highest quality fused silica, worked in the visible spectrum at two specified wavelengths (l=694 nm and l=532 nm). The corner cubes were symmetrically mounted on a hemispherical housing with one nadir-looking corner-cube in the centre, surrounded by an angled ring of eight corner-cubes. This allowed laser ranging in the field of view angles of 360° in azimuth and 60° elevation around the perpendicular to the satellite's -Zs Earth panel. The mass of the LRR was 2 kg.

The detailed design of the cubes included a compensation for the aberration of the laser beam by the velocity of the satellite: the satellite moved almost 40 metres between the emission and reception of the laser pulse from the SLR station, and that was compensated by slight non-parallelism of the reflected beam.