The ATSR onboard the ERS missions had several applications spanning the disciplines of, natural disasters, oceans & coast, snow & ice, atmosphere and land.

Volcanoes - With such a huge number of potentially active volcanoes, traditional monitoring techniques such as seismic and microgravity require assistance if all these targets are to be kept under surveillance. Spaceborne remote monitoring is one method by which this may be achieved and the ATSR was well placed to assist in the development of such techniques. This was because it could view all of Earth's terrestrial volcanoes once every three days under nighttime conditions (the ideal time for such measurements to be made). ATSR measured the amount of thermal energy being emitted from Earth's surface, and these volcanic measurements could be related to the amount of high temperature activity occurring at centres of known active volcanoes.

Measure of Radiance - During night-time observations ATSR measured the amount of thermal radiation arriving at the instrument in four different wavebands (1.6, 3.7, 11 and 12 µm), making measurements on a 1 x 1 km grid over the entire Earth surface. Whilst ATSR's longer wavelength channels were good for looking at energy emitted from ambient temperature surfaces such as the ocean, ATSR's short wavelength channel (1.6 µm) could be used to observe the significant amounts of energy emitted from very hot surfaces such as those found at active volcanoes. Since surfaces at temperatures less than around 300 °C do not emit significantly at 1.6 µm, any nighttime signal at this wavelength was evidence of high temperature activity at the location of interest. By monitoring this volcanic signal over time these measurements could be used to deduce changes in the nature of the high temperature activity and these inferences used to assist monitoring of the eruptive and pre-eruptive phenomena.

Oceans and Coast - The Earth's climate is subject to natural variability. Climatic conditions have ranged from the extensive continental glaciation characteristic of the Pleisocene Epoch, to the warm, humid conditions prevalent in the Carboniferous Period. Possibly the most serious change is the increase in atmospheric carbon dioxide (CO2) caused by the burning of fossil fuels. Climate models are united in predicting that this will cause an increase in global temperature, although the scale of this warming remains uncertain. The situation is complicated by the possibility that a short-term cooling trend, such as that due to volcanic dust or industrial aerosols, may mask any underlying increase in global temperature. Detection of such a warming trend therefore requires accurate measurement of the climate system for at least several decades.

Sea-surface temperature - The temperature of the oceans is a particularly useful diagnostic of climate change because of its relative stability, and because it is among the more reliable parameters predicted by climate models. Detection of global patterns of change in sea-surface temperature requires global coverage, accuracy, and consistency of measurement.

El Niño is a quasi-periodic phenomenon involving various changes in oceanic and atmospheric conditions, notably a warming of water in the tropical Pacific. The time-scale for its reappearance varies from two to nine years. Typically starting around Christmas time and persisting for several months, an El Niño event is associated with significant changes in weather throughout the Southern Hemisphere. As an example of this, the massive 1982-3 El Niño caused severe drought in Australia, Indonesia, the Philippines, India, Central America and Southern Africa. Other effects included a significant increase in the frequency and severity of tropical cyclones, with a rare hurricane hitting Hawaii. In total, more than a thousand human lives were lost and damage in excess of five billion dollars was caused.

Iceberg Studies - The ATSR instrument provided frequent observations of the Antarctic region, coverage of a large proportion of the coastline on a daily basis, and total coverage of the region every three days. Large icebergs, with a dimension of several kilometers across or greater, are identified in the images and their dimensions determined. These data provided the basic information to allow an assessment to be made of their spatial distribution, of their calving, breakage and melt rates, and of their movement. The icebergs represented a major component of the mass discharge from the Antarctic ice sheet, and hence of the overall mass budget of the ice sheet. The other large, but poorly known, component of the mass discharge occurs through melting from the base of the floating ice.

Clear evidence of the anthropogenic origin of this destruction is the regularity and linearity of the inroads that have been made into the forest. Many remarkably straight tracks are several hundreds of kilometers long, and were clearly apparent from ATSR's vantage point 780 km in space. Ground-based estimates of the scale and rate of deforestation are notoriously inaccurate. However, satellite images provide a reliable and convenient method for long-term global monitoring of this phenomenon. 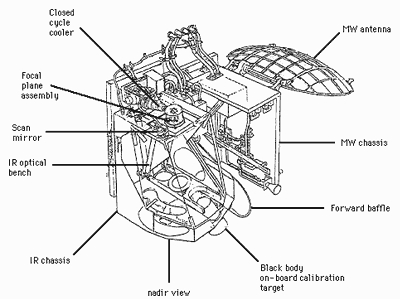 First, the ATSR viewed the surface along the direction of the orbit track at an incidence angle of 55 degrees as it flew toward the scene. Then, some 150 seconds later, ATSR recorded a second observation of the scene at an angle close to the nadir. By combining the data from these two views a direct measurement of the effect of the atmosphere was obtained, and this yielded an atmospheric correction for the surface data set which was an improvement on that obtained from a single measurement.

ATSR-1 was the test-bed for the along track scanning concept. It carried infrared channels at 1.6µm, 3.7µm, 10.8µm and 12.0µm, and had no visible channels.

The operations anomaly log for the ATSR instrument is available:

Note that any products available during outgassings, blackbody crossover tests, and satellite manoeuvres should be used with caution since their quality cannot be guaranteed. Such products should be contained within the segregated section of the archive. Further information on segregated products is available in readme files at the access points to the archive, and is provided here for reference: