The Vector Field Magnetometer (VFM) carried aboard the Swarm satellites is the primary instrument of the mission. It acquires high-precision measurements of the magnitude and direction of the magnetic field, i.e. the field's vector. The orientation of the vector is determined by the star tracker assembly, which provides attitude data. The VFM and the star trackers (STRs) are both housed on an ultra-stable structure called an optical bench, halfway along the satellite's boom. The instrument was developed and manufactured at the Technical University of Denmark. 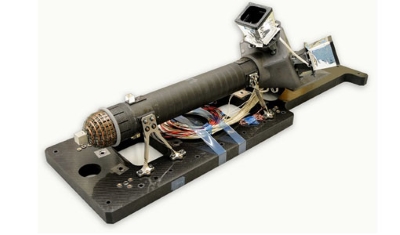 In order to obtain accurate measurements, the optical bench that contains the Vector Field Magnetometer had to be designed to keep the instruments aligned to 1 arcsec. This is a high level of stability and posed a challenge to the design team, as the instruments need to withstand huge swings of temperature as the satellites pass in and out of sunlight.

The VFM is a 3-axis Compact Spherical Coil (CSC) with a 3-axis Compact Detector Coil (CDC) inside. The instrument operates as a closed-loop system adjusting the compensating CSC currents to maintain a null field at the detector coils within the sphere. The currents in the CSC coils are measured and digitized (by an ADC) and this constitutes the raw measurements of the instrument.

The CSC Magnetometer is mounted on a Carbon Fiber Reinforced Polymer adapter with extremely high thermal stability while the Camera Head Units are supported by a Carbon-Silicon-Carbon bracket.

The star sensor is needed to provide extremely accurate attitude measurements that are required for the precise determination of the field vector. Three Camera Head Units are positioned with the boresights 90° from each other so that only one Camera Head is affected by Sun or Moon intrusion at a given time. The Camera Head Units are equipped with a straylight suppression system to minimise thermal excursions from the time varying sun impingement. Attitude data is produced by a micro Advanced Stellar Compass.

The instrument consists of a non-redundant Compact Spherical Coil sensor on the boom, a redundant Data Processing Unit inside the satellite body and the connecting harness featuring a 12-metre cable 8 millimetre in diameter. The Spherical Coil that creates a homogeneous magnetic field is installed on a stable and isotropic mechanical structure. The VFM sensor is held in place by a sliced adapter ring.

The symmetry of the positive and negative magnetic saturation levels of the ferromagnetic sensor core allow the operation of the fluxgate magnetometer by constantly probing the core saturation levels by a high frequency excitation magnetization current that enables the sensor to detect minute deviations from the zero field.

Noise on the instrument is only a few Picotesla while VFM provides a long-term stability in the sub Nanotesla range.

The VFM is an analogue instrument and as such is subject to temporal changes due to radiation and the aging effect of electronics. The effects are only significant in the bias and linear scale parameters of the characterisation; hence these parameters are estimated daily through a comparison of the VFM output with the Absolute Scalar Magnetometer output. Additionally, the non-orthogonality angles of the VFM sensor may also be estimated in this process. The allowed change from day to day in the parameters is controlled group-wise by weight parameters specified in the CCDB. The parameters estimated daily are stored in a Temporal Calibration File (TCF) as an auxiliary data product.