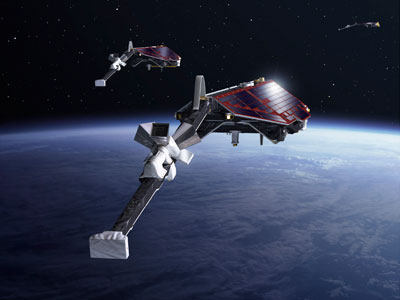 Swarm is the fifth mission in ESA’s fleet of Earth Explorers that was selected in 2004 in ESA’s Living Planet Programme. While other Earth Explorers only use one satellite, Swarm comprises a constellation of three satellites in near-polar low orbits to obtain better and more varied measurements. The Swarm mission was launched from Plesetsk Cosmodrome on 22 November 2013.

The mission studies the magnetic field and its temporal evolution providing the best-ever survey of the geomagnetic field. Its data help to improve our understanding of ocean currents and interactions in the atmosphere, electric currents in the ionosphere and their connection to the magnetosphere. The international Swarm DISC consortium is formed to support frontier research and enhance the scientific return of the Swarm mission.

Learn more about the Swarm mission in this infographic:

Anja Strømme, ESA's Swarm Mission Manager, introduces herself and describes what she likes best about this mission.

The three Swarm satellites have a rather unusual shape: trapezoidal with a long boom that was deployed once they reached orbit. The design was necessary to overcome challenges in accommodating the instrument package, and, because the satellites needed to fit into a single payload aboard the rocket.

Each satellite is about 9 m long, including the boom, with the surface at the front only measuring about 1 m2. This is to reduce the effect of air drag and to cut down on the amount of propellant needed to stay at the correct altitude. Below around 500 km, air drag tends to slow satellites down and lower the orbit.

The boom, which accounts for almost half the length of the satellite at 4 m, trails at the back. This is because the front surface is needed for the electric field instrument so that it can collect and measure the speed and direction of incident ions along the orbital path.

The satellite has no moving parts. This ensures that there are no vibrations that could influence the measurements made by the accelerometer, which is fixed at the very centre of the satellite. Likewise, the solar panels are fixed, forming the satellite 'roof'.

Magnetic cleanliness is of paramount importance to the mission, so the sensitive scalar magnetometers are mounted at the end of the boom, far away from any magnetic disturbance that the electrical units on the body may cause. The optical bench holding the vector field magnetometer and the three star trackers is mounted halfway along the boom. Throughout the design and manufacturing phases, magnetic cleanliness was a priority, with many tests carried out on almost every unit and final testing of the assembled satellite took place in a special facility.

At the beginning of the mission the satellites had a mass of 472 kg, with an additional 106 kg propellant at launch.

Due to the subtle difference in altitude and inclination, the Swarm B orbit drifts slowly away from the Swarm A/C orbits at a rate of about 24°/year (difference in longitude of the ascending node). In October 2021, the orbital planes realigned, Swarm B counter-rotating with respect to Swarm A and C. To maximise the scientific return of this conjunction, the Swarm A and C satellites were brought back into the same orbital plane, starting with a manoeuvre in October 2019 that would slowly reduce the separation in longitude, achieving a perfect alignment at the exact time of the conjunction with Swarm B. During the conjunction, the distance between the Swarm A and C satellites was reduced to only 2 s along the orbit (15 km), which was previously kept between 4–10 s for safety reasons.

There are two ground stations for Swarm located at ESA's facility in Kiruna, Sweden, 15 m (single station mission baseline); and a second facility at KSAT in Svalbard, Norway.

Discover more about the Swarm operations and track the mission in real-time with the ESTRACKnow tool.