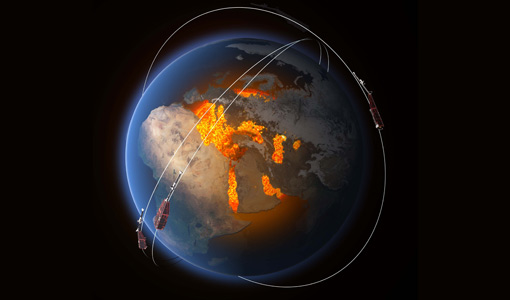 The objectives of the Swarm mission are to:

By making key observations to untangle and model the many sources and strengths of Earth's continuously changing magnetic field, the Swarm mission is set to advance many areas of Earth science.

One of the very few ways of probing Earth's liquid core is to measure the magnetic field it creates and how it changes over time. Since variations in the field directly reflect the flow of fluid in the outermost core, new information from Swarm will further our understanding of the physics and dynamics of Earth's stormy heart.

The constellation of Swarm satellites will produce, for the first time, global 3D images of electrical conductivity in the mantle. This will yield evidence of its chemical composition and temperature, which will complement seismic analysis and observations of gravity such as those from ESA's GOCE mission.

We can learn more about the history of the magnetic field and geological activity by studying magnetism in the lithosphere. For example, by analysing the magnetic imprints of the ocean floor, past core-field changes can be reconstructed. This also helps to investigate tectonic plate motion. Magnetic signals from the crust need to be determined from space in much higher resolution than currently available. By complementing the spatial scales observed by Swarm with magnetic surveys from aircraft, our understanding of Earth's crust will be improved.

Magnetic sensors measure a tangle of the core field with other signals from magnetised rocks in the crust, electrical currents flowing in the ionosphere, magnetosphere and oceans, and currents inside Earth induced by external fields. The challenge is to separate the different sources of magnetism. GPS receivers, an accelerometer and an electric field instrument deliver supplementary information to study the interaction between Earth's magnetic field and the solar wind.

As well as the advanced technology the satellites carry, their carefully selected orbits are essential to the success of the mission. At the start of life in orbit, the three satellites are relatively close to each other. Two orbit almost side-by-side at the same altitude: initially at about 460 km, but descending to around 300 km over the life of the mission.

The lower the satellites are, the more sensitively they can measure small magnetic features in the crust. The third satellite remains in a higher orbit, initially at 530 km, and at a slightly different inclination. The satellites' orbits drift, resulting in the upper satellite crossing the path of the lower two at an angle of 90° in the third year of operations.

These drifting orbits mean that all the magnetic signals originating from Earth and those caused by the Sun are captured.

The Sun generates typical day and night patterns in the ionosphere between the satellites and Earth. Magnetic storms resulting from solar activity also cause irregular disturbances in the ionosphere and magnetosphere. Essentially, the constellation optimises the measurements of relevant phenomena. This helps to distinguish between the effects of different sources of magnetism. For example, global field models of the core and crust and conductivity maps of the mantle are needed to study the interior of Earth. These can only be obtained from a combination of selected observations from all three satellites over time.

For studies of the upper atmosphere, each satellite provides information such as ion speed, direction and temperature. Density and winds around each satellite can be derived by using data from the different instruments. Combining observations of the lower pair of satellites will lead to a new way of quantifying the currents that flow along geomagnetic field lines connecting the magnetosphere to the high-latitude ionosphere. It is therefore essential to have the constellation of satellites to offer new opportunities for science.

A unique mixture of local and global products will allow data users to address some of today's open scientific questions related to global change. Swarm will also benefit a broad range of applications in Earth sciences and space weather.

See a playlist of videos highlighting scientific achievements of the Swarm mission: