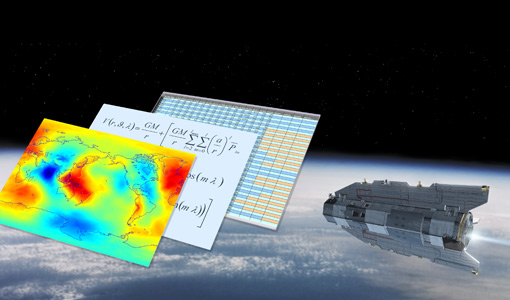 Although terrestrial data on the subject of gravity have been collected for many years now, the advent of the space age has provided the opportunity to acquire a detailed map of the global gravity field within a short period of time. The degree to which altimetry data could be used to make precise estimates of the transport of heat, salt and freshwater was previously limited by the quality of the geoid. It was, therefore, the combination of sea-surface height mapped by altimeters and the knowledge of the precise ocean geoid that has improved our understanding of surface currents and leading to a better knowledge of general ocean circulation patterns – crucial for understanding climate change.

The geoid, which is defined by Earth’s gravity field, is a surface of equal gravitational potential. It follows a hypothetical ocean surface at rest, in the absence of tides and currents. A precise model of Earth’s geoid is crucial in deriving accurate measurements of ocean circulation, sea-level change and terrestrial ice dynamics, all of which are affected by climate change. The geoid is also used as a reference surface from which to map all topographical features on the planet.

An improved knowledge of gravity anomalies contribute to a better understanding of Earth’s interior, such as the physics and dynamics associated with volcanism and earthquakes. The gravitational signal is stronger closer to Earth, so GOCE has been designed to fly in a very low orbit. However, the ‘atmosphere’ at low altitudes creates a very demanding environment for the satellite in terms of resources such as propellant and electrical power, and therefore data were collected for just 20 months. Taking the data a step further, GOCE measurements are also being used to model ocean current speeds.

Combined with the GOCE geoid, satellite altimetry data records of the mean sea-surface height measured over a 20-year period by satellites including ESA’s veteran Envisat, can be used to provide a detailed retrospective picture of ocean circulation patterns and variations, and their consequences for the global water and energy cycles. The result showed the mean dynamic topography of the ocean surface, showing higher- and lower-than-average water levels. Based on this map, ocean currents and their speeds were calculated and validated using in situ buoys.

GOCE was the first Earth Explorer mission to be launched. The Earth Explorers are part of ESA's Living Planet Programme and each is dedicated to monitoring a different aspect of Earth's environment to help improve our understanding of the planet.

See a summary of the GOCE mission in the following infographic: 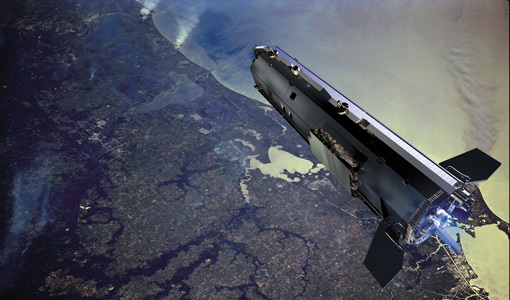 The sleek, elegant aerodynamic design of GOCE immediately set it apart from most other satellites. Since it was vital to ensure that the measurements taken were of true gravity and not influenced by any movement of the satellite, this unique arrow-shaped satellite had none of the moving parts often seen in other spacecraft. Therefore, the satellite together with its instrumentation actually formed a single composite gravity-measuring device. A particular feature of the GOCE system design was that the drag-free and attitude-control system used the scientific payload as a sensor.

The orbit of the satellite had to be as low as possible to observe the strongest possible gravity-field signal – hence GOCE had been designed to skim above Earth at a height of just 250 km.  GOCE's slim elongated form enabled it to cut through the wisps of atmosphere that are still present at that height. The advanced drag compensation and attitude-control system was a key feature required to keep the accelerometer sensor heads in near 'free fall motion' and to maintain the orbit altitude at about 250 km. The system was based on ion propulsion technology. The electric ion propulsion system comprised two thruster units (one as backup) mounted at the back of the satellite. The thrusters could be throttled between 1 and 20 millinewtons (mN), set automatically, depending on the actual realtime drag the satellite experienced in orbit.

The result was a slim five metre-long satellite with a cross sectional area of about 1m2 and weighed in at about 1050 kg. The satellite was symmetrical about its horizontal plane and had two winglets that provided additional aerodynamic stability. Once in orbit, the same side of the satellite remained facing the Sun. The satellite was equipped with four body-mounted and two wing-mounted solar panels, which used triple junction Gallium Arsenide solar cells. Due to the orbit and satellite configuration, the solar panels experienced extreme temperature variations. The design therefore had to include materials that could tolerate temperatures as high as 160°C and as low as -170°C. 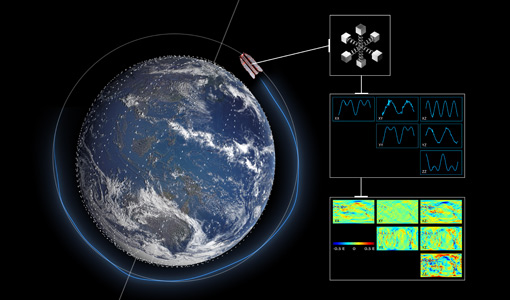 The cold side, which faced away from the Sun, was used in part as a radiator to dissipate heat into space. All the external coatings, in particular those situated in the direction of flight, were protected against high atomic oxygen flux, which would otherwise have eroded unprotected materials very quickly at this low orbit. Due to its stringent temperature stability requirements (for the gradiometer sensor heads, in the range of milli-Kelvin) the gradiometer was thermally decoupled from the satellite and had its own dedicated thermal-control system.

The star trackers were mounted as close as possible to the EGG gradiometer to reduce misalignment during mission operation. The micro-propulsion was originally justified by the need to guarantee the linear acceleration control along the Y and Z axes of the spacecraft and for the pointing control.

The development of the micro-propulsion thrusters had been pursued via a pre-verification programme, suite for determining the best candidate between cold gas and FEEP technology. In July 2003, the use of micro-propulsion was abandoned because the development maturity was no longer in line with the need of the GOCE programme. The control strategy of the spacecraft was then revisited and redefined, by maximizing the use of already present capability and minimising the impacts of cost and schedule. A simpler calibration system “Gradiometer Calibration Device” (GCD) had been added to the GOCE on board functions for allowing the performance of the in flight calibration of the gradiometer.

The angular acceleration control and the spacecraft pointing was charged to the magnetic torquers, and the cross-track linear acceleration control was abandoned. Their effect on the overall science performance was smoothed introducing the capability to fly in the wind instead of maintaining a rigid three-axis stable attitude. 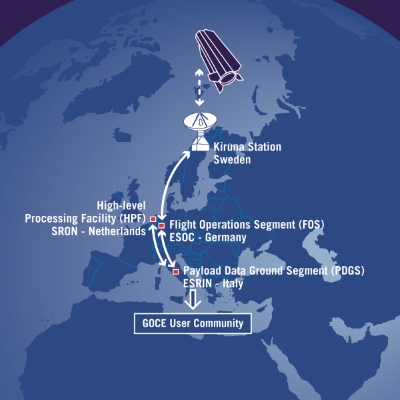