Together, the five RapidEye satellites are capable of collecting over 4 million square kilometres of 5 m resolution, 5-band colour imagery every day. 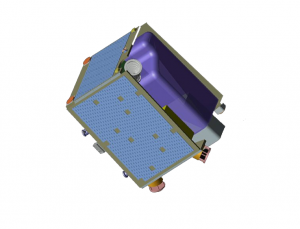 Launched on 29 August 2008, RapidEye is a constellation of five identical satellites owned and operated by Planet Labs. The constellation was deactivated on 31 March 2020 but Planet Labs still offers data archive.

RapidEye is part of ESA's Third Party Missions Programme, in which ESA has an agreement with Planet to distribute archive data products from the mission.

The RapidEye objective was to provide a range of Earth Observation products and services to a global user community.

The REIS sensors on the RapidEye constellation mean that for the first time, there is a constellation of five Earth imaging satellites that contain identical sensors, which are in the same orbital plane and are calibrated equally to one another. An image from one RapidEye satellite is identical in characteristics to an image from any of the other four satellites, thus allowing access to an unprecedented amount of imagery collected on a frequent basis.

The instrument is also referred to as JSS-56 (Jena-Optronik Spaceborne Scanner-56) as well as MSI (Multispectral Imager) in the mission literature.

ESA is offering access to the full RapidEye archive for scientific research and application development. Access is only available to submitted proposals that are accepted.

As many as possible of the high-quality and innovative proposals submitted will be supported within the quota limit available.

ESA offers to registered user the access through the Online Dissemination server to the following data collections:

Search for RapidEye Level 3A products in the Planet Explorer. This online catalogue provides the option to search for and browse recent and past data over selected areas and times.