NASA's Aura mission studies the chemistry and dynamics of Earth's atmosphere from the ground through the mesosphere. 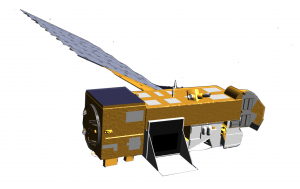 Aura is a NASA owned and operated Earth Science satellite which launched on 15 July 2004. It was designed to operate for six years, but remains operational over 15 years later. The Aura mission is a part of the international Earth Observing System (EOS) series of satellites and studies the chemistry and dynamics of Earth's atmosphere from the ground through the mesosphere.

In many ways, Aura is a follow-on to NASA's very successful UARS (Upper Atmosphere Research Satellite) mission. UARS made stratospheric constituent measurements from 1991-2005. Unlike UARS, however, Aura is designed to focus on the lower stratosphere and the troposphere.

Aura is part of ESA's Third Party Missions Programme, in which ESA has an agreement with NASA to distribute data products from the mission's OMI instrument.

The overall objective of Aura is to monitor ozone and other trace gases and to monitor tropospheric pollutants worldwide. Aura's OMI instrument measures trace gases in the atmosphere by detecting their unique spectral signatures. A unique observing geometry allows the Aura instruments to combine their measurements to get a better picture of the atmospheric chemistry.

The OMI instrument on board Aura is a nadir-viewing Ultraviolet/Visible spectrophotometry imaging spectrograph which measures the solar radiation backscattered by Earth's atmosphere and surface over the entire wavelength range from 270 to 500 nm, with a spectral resolution of about 0.5 nm and a swath width of 2600 km. OMI is a contribution of the Netherlands Agency for Aerospace Programmes (NIVR) in collaboration with the Finnish Meteorological Institute (FMI).