< Back to Main Activity Page

The ‘Radiometric Uncertainty Tool' project has the overall objective is to define a generic software implementable methodology for assessing the radiometric uncertainty per pixel of the TOA radiance/reflectance products from a satellite, leading to an ‘uncertainty image'.

Since October 2014, this project is further developed as part of the ESA contract No. IDEAS+/SER/SUB/10 named "Sensor Performance, Product and Algorithms Maintenance and Operations of the Earth Observation Payload Data System". The main areas of research include:

The radiometric uncertainty analysis starts by identifying the different steps in the Sentinel-2 MSI instrument and L1 processing chain. The figure below displays graphically these steps. The complete Sentinel-2 L1 radiometric model can be found in [1] 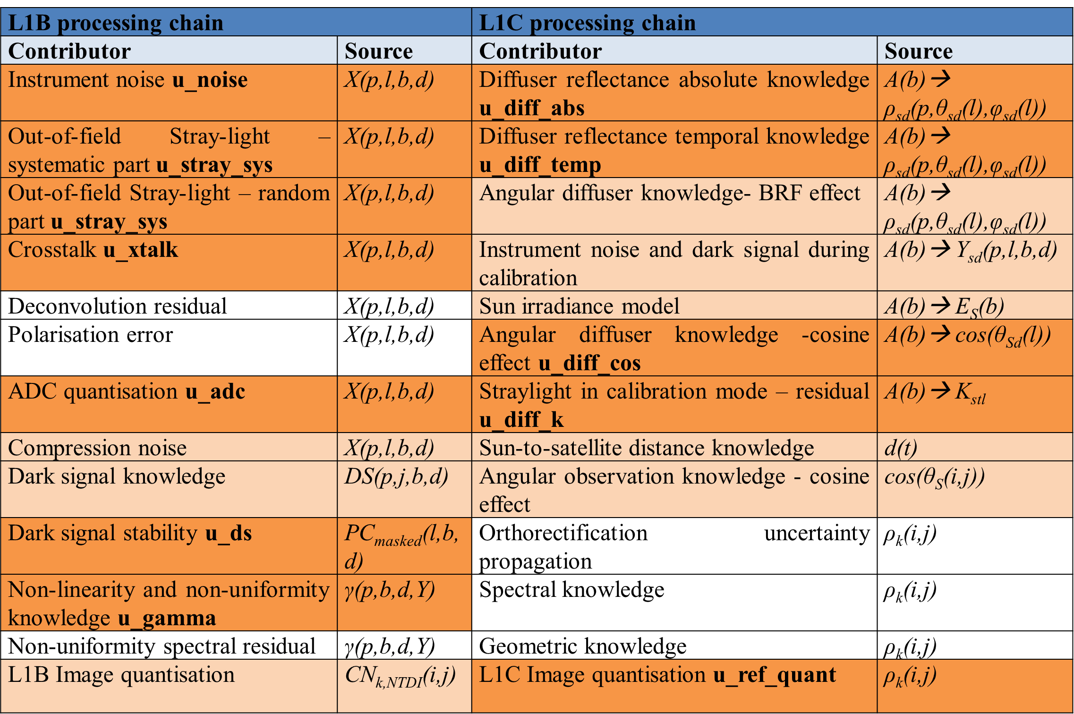 The model follows the GUM [2] to combine the L1 radiometric uncertainty. The equation for the expanded uncertainty (i.e. the uncertainty at a defined coverage probability) is

No significant correlation between contributors has been identified due to the independent nature of the L1 parameters. This simplifies the combination of the standard uncertainty as shown.

The same concept can be applied to the different terms in the standard uncertainty combination model:

Validation of the central limit theorem and normal distribution

The GUM model relies on the assumption that a generalised central limit theorem applies to the combination model. In those circumstances, the standard uncertainty can be associated to the normal distribution and a specific coverage probability can be determined. An initial comparison to the Monte-Carlo method in [3] determined the validity of the normal distribution except at very low radiance levels (i.e. close to Lmin) levels). A more extensive validation has been performed. The figure below shows the difference between the uncertainty k=1 by using the GUM combination and by determining an area of the Monte-Carlo distribution symmetric from the mean. The range of radiance goes from approximately Lmin to Lref. 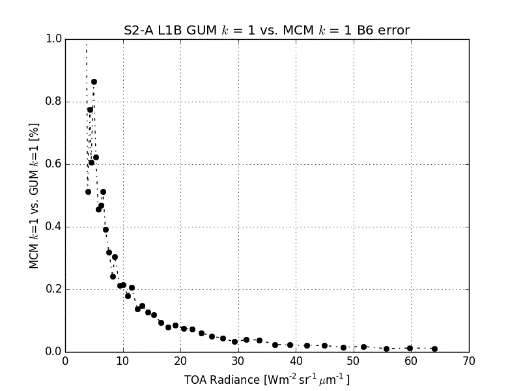 Impact of the sensitivity coefficient

The terms u'DS and u'ADC are further calculated as follows: