A test pilot Fire Detection Service, based on real-time processing of Landsat-8 data is being assessed within the framework of ESA's Earthnet Programme.

The Fire Detection Service is based on FarEarth, an application developed by PinkMatter Solution that allows the detection of potential fires in real-time. Real-Time means that the Landsat data are processed during the downloading phase of the images and a fire-detection algorithm is immediately applied on the processed data to identify potential fires affecting the area covered by the on-going acquisition. Immediately after the detection phase, the information on the potential fires is delivered to users by email while the original full Landsat data is not archived.

This information consists of a geo-referenced map with the location of each detected fire and a kmz file that contains the same map as a layer. The kmz file is very useful to obtain logistic information (presence of roads, infrastructure, inhabited areas, etc.) in the area affected by the detected fire(s). This information can prove vital for responders on the ground, who must plan how to tackle the fires.

An example of a recent fire detected with this monitoring method is reported in the picture below. It features a large fire detected using a Landsat-8 image acquired on 27 June 2018.

The information obtained by the analysis of the Landsat-8 images identifies a wildfire over Manchester (UK).

The Landsat-8 derived data from this test pilot activity have been used in the tasks of the Copernicus Emergency Management Service – Rapid Mapping for the review of the first post-event analysis over the affected area.

The figure below shows the first Delineation map based on the Landsat-8 acquisition, representing the extent of the burnt area and the detected active flames. 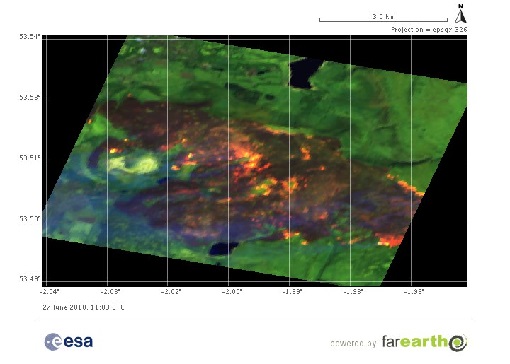 The Copernicus EMS Rapid Mapping Service consists of the on-demand and fast provision (within hours or days) of geospatial information in support of decision-making processes for emergency management activities, immediately following an emergency event.

For this reason, the first requirement of the 24/7 Rapid Mapping Service is timeliness.

Giuseppe Ottavianelli, ESA Earth Observation Third Party Missions Manager for both the Earthnet missions and the Copernicus Contributing missions, adds: "The Landsat-family missions have been long-standing ESA Third Party Missions. Following the improvements of the USGS global data availability, ESA is moving from the classical Landsat 8 L1 production towards the testing of new Real Time processing pilot that currently focuses on automated fire detection. ESA is consolidating the end-to-end chain by further understanding the specific needs of different user groups. And we are also evaluating other potential applications.The Manchester example has showed how these tests, which have implemented through the ESA Earthnet programme, may in the future be embraced by other operational frameworks such as the one of Copernicus. ESA plays a key role in bridging research and applied operational solutions."

Regarding the wildfire in England, the RT availability of Landsat-8 based results allowed to provide authorised users with the post-event analysis within 7 hours after the Rapid Mapping Service had been triggered. 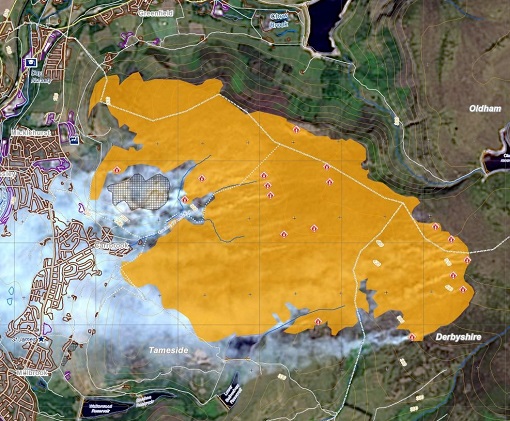