A new study entitled “Coastal current intrusions from satellite altimetry” has just been published in the journal Remote Sensing. This study comes from an international collaboration between the European Space Agency (ESA), MIO (Fr), CNR (It) and Serco (It) with the goal of monitoring coastal intrusions into the Gulf of Lion by analyzing multi-mission Satellite Altimetry data with Machine Learning methods. 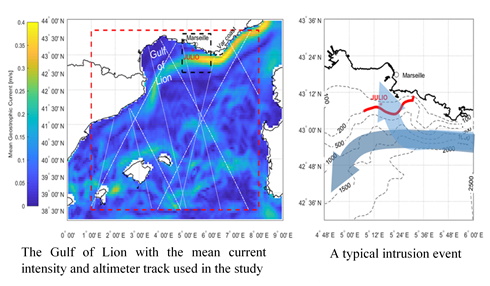 The Gulf of Lion is open to the Mediterranean Sea and bordered by the North Current, which runs along its continental slope. The North Current can enter the plateau of the Gulf of Lion during so called “intrusion events”, which can have a strong impact on marine life, and important consequences on regional fishing.

Satellite altimetry measures the time a radar pulse takes to travel from the satellite antenna to the ocean surface and back. Several applications have been developed from these measurements. One of them is to monitor the variability of sea level and, from that, to estimate intensity and direction of the marine currents, as the Northern Current. However monitoring from space the intrusions of such small scale coastal current raises several technical issues, mostly related to the fine dimensions of the current intrusions and to the vicinity of the coast.

In this study, a new algorithm, based on machine learning methods, able to detect intrusion events from satellite altimetry. In order to verify the reliability of the algorithm, its outputs have been compared to the current data collected by an instrument moored at the bottom of the sea offshore of Marseille, at the JULIO station. The algorithm proved effective, identifying 93% of current intrusions.

This work paves the way for a future monitoring of coastal marine currents and oceanic fine scale dynamics by satellite, especially using the new generation of high-resolution altimeters from CryoSat-2 and Sentinel 3 as well as the forthcoming Sentinel 6, SWOT and the Ka/Ku-band CRISTAL missions