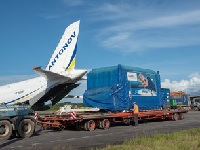 The Metop-C launch campaign has kicked off with the first of three Antonovs landing at Cayenne Airport, French Guiana on 20 June.

The cargo aircraft transported 11 containers of equipment for ground support and IT-infrastructure, followed by the second, carrying the two main modules of the spacecraft a few days later. The third and final Antonov brought the solar array.