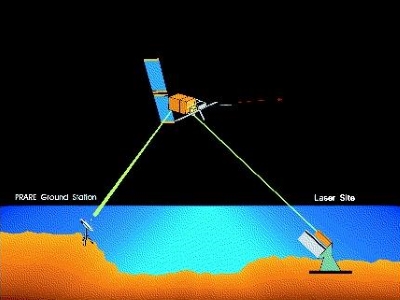 The high quality measurement of the PRARE data as well as their good global repeatability, density, and spatial distribution suited the data for deriving several higher-level geodynamic products for such applications as:

PRARE was flown on ERS-2 (ESA procurement). It was in “operational status” as of Jan. 1, 1996 (i.e. the routine range and range rate product generation started on Jan. 1, 1996) providing measurement accuracies between 2.5 and 6.5 cm (two-way range data) and 0.1 mm/s (two-way range-rate data) respectively. PRARE operations were fully autonomous and separate from ERS-2 operations.

PRARE was a microwave tracking system operating at centimeter accuracy levels for the measurement of satellite to ground range and range rate. The concept was based on an autonomous spaceborne two-way and dual frequency microwave tracking system with its own telemetry, telecommand, data storage, timing and data transmission capabilities. This allowed data analysis on a global basis within a very short time delay. Due to the microwave transmission concept, the system operated independently from weather and daylight conditions.

1) Space Segment: This was a small self-contained hardware unit with a mass of 19kg, power consumption of 39 VA (operational), or 8 VA in standby mode, and communication links independent of the host satellite.

2) Ground Station Network: The network consisted of small automated and transportable ground stations (whose positions were known or could be determined from PRARE data to high precision). At X-band a ground station worked as a regenerative and coherent transponder, at S-band a station acted as a receiver for the transmitted signals and measures the difference of the time of arrival of both signals.

These stations had special data evaluation, system control, and communication capabilities, which allowed to fully control the space segment on ERS-2 as well as each individual ground station via the primary PRARE microwave links. This unique feature made the PRARE system operations independent from the host satellite (except for power) and adaptable for any near-Earth communication, navigation, or observation satellite system.

Two continuous signals were emitted from the space segment to the ground, one of which is in S-band (2.2 GHz), the other in X-band. Both signals were modulated with a PN-code (pseudo random noise, 1 MChirp/s for the S-band and 10 MChirp/s for the X-band) used for the distance measurement and containing data signals (broadcast information) for ground station operation (prediction of orbit visibility, etc.). The time delay in the reception of the two simultaneously emitted signals was measured at the ground stations with an accuracy of better than 1ns; the result was retransmitted and stored in the on-board memory of PRARE for later ionospheric correction of the data.

In the ground station the received X-band signal was transposed to 7.2GHz, coherently modulated with the regenerated PN code (or with one of three orthogonal copies for code multiplexing) and including the two-frequency delay data as well as housekeeping and meteorological ground data was retransmitted to the PRARE space segment.

The PRARE space segment consisted of a compact electronics box (dimensions 400 x 210 x 180mm, power consumption 30W in operational mode and 8W in stand-by) and two crossed dipole antennas for transmission of the X-band and S-band signals. The X-band antenna also received the microwave signal after it had accomplished the round-trip transmission.

The space segment design featured four independent, parallel, strictly coherently operating receiver channels which track up to four PRARE ground stations that were in view of the satellite simultaneously. This allowed to generate overlapping measurement data used for internal calibration and for back-up of the main orbit solution. This required a very careful internal hardware design and sophisticated control of all modules.

The very heart of the whole PRARE system was the internal oscillator of the space segment which was not only responsible for time tagging of the signal generation and communication processes, but in fact controlled the complete system synchronization in ultra-short- (up to 1 second), in short- (up to 1000 seconds) and in long-term (more than 1000 seconds):

The PRARE space segment oscillator was an ultra-stable voltage controlled quartz-crystal oscillator (VCXO) designed in BVA technique, and a state-of-the-art type of quartz oscillator. The primary output frequency is 5MHz, which is divided/multiplied by the space segment electronics to generate all the frequencies necessary within the system.

The space segment was built by Kayser Threde of Munich, and TimeTech GmbH of Stuttgart; the ground stations were developed by Dornier GmbH, Friedrichshafen

Dedicated ground stations were used, which were acting basically as regenerative transponders. A PRARE ground transponder consisted of:

During satellite contact, the main tasks of the ground station modules were: