The GEO-XV Plenary and GEO Week 2018 took place in Japan from 27 October to 2 November 2018, at the International Conference Center in Takaragaike, Sakyo-ku, Kyoto.

Signed at this same location on 11 December 1997, the Kyoto Protocol was an international treaty that extended the 1992 United Nations Framework Convention on Climate Change, which commits state parties to reduce greenhouse gas emissions.

As such, it provided the perfect setting to discuss the progress made by the Group on Earth Observations (GEO) in improving the availability, access and use of Earth observation for a sustainable planet, with a focus on the three GEO engagement priorities:

During the meeting, recent and upcoming enhancements and features of the GEOSS Platform were demonstrated. Managed by the European Space Agency as part of the EDGE project and co-funded by the European Commission and ESA, the platform offers improved discovery, access and use of over 430 million registered Earth observation resources from all over the world and from more than 5,000 resource providers via the GEOSS Portal and developed Community Portals.

The use of workflows for learning more about climate themes was demonstrated for ecosystem modelling in the context of the European Commission co-funded project ECOPotential. Attendees were shown the whole process, beginning from protected areas, ecosystems, workflows, selection of data, activation of the process and visualisation of results via the GEOSS Platform portal.

The use of datacubes was addressed in a collaboration with the European Commission co-funded project GEOEssential, which benefits from the GEOSS Platform instruments in combination with the Swiss Datacube to support Sustainable Development Goals with a focus on indicator 15.3.1 proportion of land that is degraded over total land area. 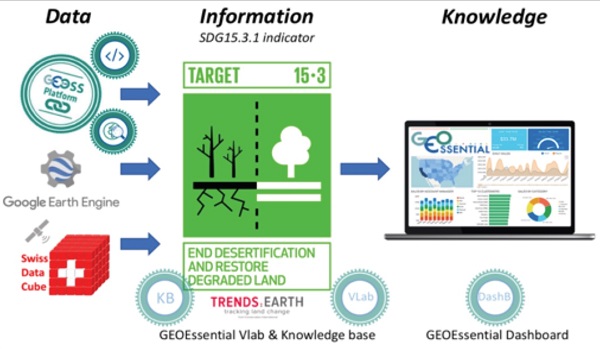 The GEOEssential project supports the Sustainable Development Goal indicator generation 15.3.1 proportion of land that is degraded over total land area

A third demonstration regarded on-demand generation of Analysis Ready Data from Copernicus Sentinel-2 and Landsat-8 data for selected land applications. Such Analysis Ready Data is easier to use for those who are not experts in the use of satellite data.

The European Space Agency is working together with the GEO Secretariat, the Italian Research Council – the Institute of Atmospheric Pollution (CNR-IIA), the University of Geneva (UNIGE), the United States Geological Survey (USGS), the European Commission DG JRC and DG RTD, MINES ParisTech and many other stakeholders, to further improve the implementation of GEOSS, thus supporting decision-makers to take better-informed decisions and actions for the benefit of society.

The objective is to continue such developments into 2019, in line with the GEO engagement priorities so the GEO XVI Plenary – which will take place in Canberra, Australia, at the end of 2019 - will be an even greater success.

The Along Track Scanning Radiometer (ATSR) on board ERS-1 and ERS-2 mission consisted of two instruments, an Infra-Red Radiometer and a Microwave Sounder. Read more

The status of the mission was recalled: Experimental Phase is running since July 2020 with the perspective to prepare the ground for the launch and exploitation of PV-CC mission. The latest delay in the schedule of the PV-CC launch (currently Q1/Q2 2022) changed the approach for exploitation, notably owing to the degrading Proba-V illumination conditions at the time of the launch. On the processing side, the main priority is to finalize the verification phase for the C2 and start the full mission reprocessing. Read more

The SMOS Artificial Scene Library (ASL) function allows users to directly use the L1B product version 7 by mimicking the Gibbs-2 image reconstruction correction algorithm as it is implemented in the level 1 operational processor. Read more

The BelSAR project intended to carry out an airborne campaign for SAR bistatic interferometric measurements at L-band and full polarization, over a test site in Belgium. Read more

PinkmatterSolutions, an organisation that specialises in the development of real time1and near-real2time satellite imagery processing and information extraction algorithms, has developed the FarEarth FireBoxalgorithm that supports the important provision ofa unique, fire detection in real-time (RT)satellite imageryservice.This service, which is based on the processing chain depicted in Figure 1-1[RD-1],sees to the application of the aforementioned algorithm to imagery from a satellite pass,during the downlink phase,in order to detect firesas soon as possible(i.e. early warning)and to generate alerts that can then be passed on to the emergency services Download