SAR is an active system.

It illuminates the Earth surface and measures the reflected signal. Therefore, images can be acquired day and night, completely independent of solar illumination, which is particularly important in high latitudes (polar night). 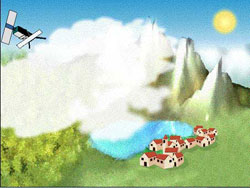 The microwaves emitted and received by ERS SAR are at much longer wavelengths (5.6 cm) than optical or infrared waves. Therefore, microwaves easily penetrate clouds, and images can be acquired independently of the current weather conditions.

The spacecraft flew in its orbit and carried a SAR sensor which pointed perpendicular to the flight direction.

The projection of the orbit down to Earth is known as the ground track or subsatellite track. The area continuously imaged from the radar beam is called radar swath. Due to the look angle of about 23 degrees in the case of ERS, the imaged area is located some 250 km to the right of the subsatellite track. The radar swath itself is divided in a near range - the part closer to the ground track - and a far range.

In the SAR image, the direction of the satellite's movement is called azimuth direction, while the imaging direction is called range direction.

The most striking feature in SAR images is the "strange" geometry in range direction. This effect is caused by the SAR imaging principle: measuring signal travel time and not angles as optical systems do.

The time delay between the radar echoes received from two different points determines their distance in the image. Let us consider the mountain as sketched in the figure. Points A, B and C are equally spaced when vertically projected on the ground (as it is done in conventional cartography).

However, the distance between A'' and B'' is considerably shorter compared to B'' - C'', because the top of the mountain is relatively close to the SAR sensor.

This effect is called "foreshortening". It is, among other effects, the most common geometric distortion in SAR images. Foreshortening is obvious in mountaineous areas, where the mountains seem to "lean" towards the sensor as seen in this ERS image. 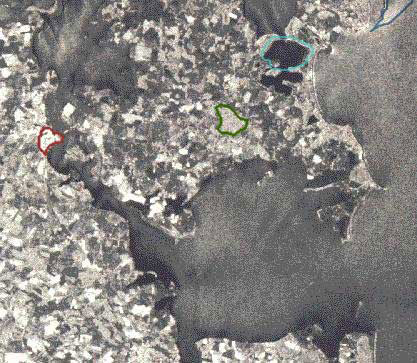 The SAR measures the power of the reflected signal, which determines the brightness of each picture element (pixel) in the image. Different surface features exhibit different scattering characteristics: