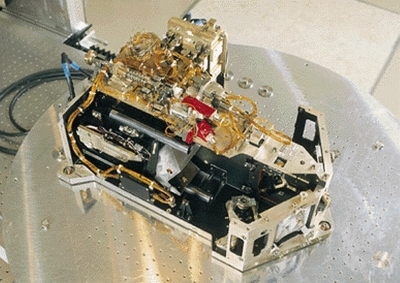 The Michelson Interferometer for Passive Atmospheric Sounding (MIPAS) was a Fourier transform spectrometer for the detection of limb emission spectra in the middle and upper atmosphere on the Envisat mission. It observed a wide spectral interval throughout the mid infrared with high spectral resolution. Operating in a wavelength range from 4.15 microns to 14.6 microns, MIPAS detected and spectrally resolved a large number of emission features of atmospheric minor constituents playing a major role in atmospheric chemistry.Due to its spectral resolution capabilities and low-noise performance, the detected features could be spectroscopically identified and used as input to suitable algorithms for extracting atmospheric concentration profiles of a number of target species.

All Envisat MIPAS products, in accordance with ESA Earth Observation Data Policy, are freely available to registered users via FTP. Read more about the available products and the registration process which is required to access them:

The Atmospheric Toolbox tool can be used to visualise, process and analyse MIPAS data:

The Atmospheric Toolbox (also known as BEAT) is a collection of executable tools and an application programming interface (API) which has been developed to facilitate the utilisation, viewing and processing of missions including Envisat, for GOMOS, MIPAS SCIAMAHCY and GOME instruments.

The goal of MIPAS calibration and validation activities was to verify the accuracy and quality of data the instrument acquired.

Quality control activities were undertaken for MIPAS products during the Envisat mission lifetime. Reports are available detailing the availability of MIPAS products, anomalies with the products, and daily and monthly quality reports.