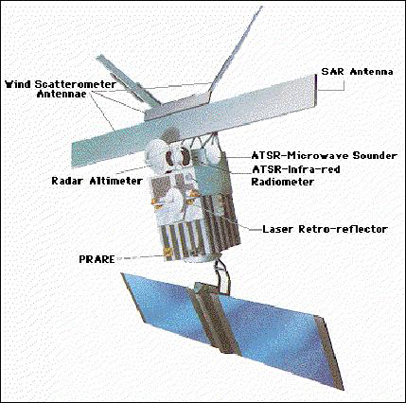 The Wind Scatterometer (WS) was an instrument on board the ERS-1 mission.

The WS instrument was designed to record wind measurements over the oceans by observing changes in radar backscatter. It obtained information on wind speed and direction from the oceans surface for incorporation into models, global statistics and climatological datasets. It operated by recording the change in radar reflectivity from the oceans due to small waves caused by wind close to the surface. This was possible because the radar backscatter returned to the satellite was modified by wind-driven waves on the oceans surface and, since the energy in these waves increased with wind velocity so did backscatter.

The WS worked in tandem with the Synthetic Aperture Radar (SAR) instrument in a configuration called the 'Active Microwave Instrument' (AMI). The AMI was operated in either SAR or Wind mode but could also operate in a combined mode - wind/wave mode which consisted of Scatterometer operations (Wind mode) interrupted every 30 seconds (roughly 200 Km) by a couple of seconds of a short SAR operation in order to acquire small SAR images of roughly 6 x 6 km from which wave spectra could be derived.