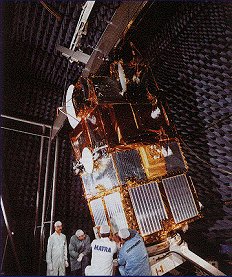 In ocean mode a chirped pulse of 20 micro-s duration was generated with a band width of 330 MHz. For tracking in ice mode an increased dynamic range is used, obtained by reducing the chirp bandwidth by a factor of four to 82.5 MHz, though resulting in a coarser resolution.

The Radar Altimeter for ERS-1 was designed to meet very demanding constraints and had the following major objectives: 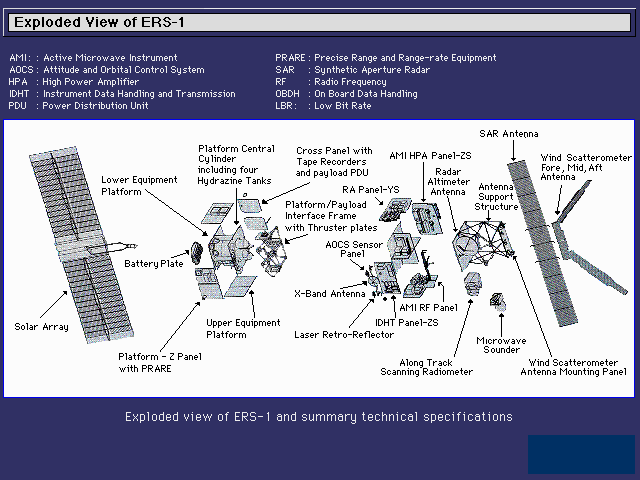 The Radar Altimeter antenna consisted of a reflector, waveguide feed, tripod plus supporting structure, horn feed and the waveguide.

The Frequency Generator units provided the transmit signal at a frequency of 450 MHz to the chirp generator. This generated a chirped output with a bandwidth of 165 MHz (ocean) and 41.25 MHz (ice), gated within a pulse of 20 micro-s. This signal was up-converted and multiplied (using C- and L-band LO signals) to 13.8 GHz, with 330 MHz (ocean) and 82.5 MHz (ice) bandwidths. The required power output level (42 dBm) was generated by the High Power Amplifier (HPA), which was realised as a Travelling Wave Tube and Electronic Power Conditioner (TWT/EPC) combination. A harmonic filter at the TWT output attenuated the harmonics of the RF signal. The transmitter signal was fed to the antenna.

The returned signal was routed to the receiver via the Front End Electronics, with an insertion loss of approximately 1.6 dB. The received chirp signal was deramped by mixing it with the LO chirp at a frequency of 15.025 GHz. The deramped output (first IF) was at 1.225 GHz. The signal was then amplified to recover the conversion loss, filtered and mixed with a second LO chirp (1.3 GHz) to provide a second IF of 75 MHz. The second IF signal was filtered, using a surface acoustic wave (SAW) device with a bandwidth of 3.2 MHz and passed via a step attenuator. This provided an overall gain adjustment over a 62 dB range, implemented as two 31 dB step attentuators with a step size of 1 dB. The output was then coherently detected by a quadrature IF mixer to obtain the I- and Q-components of the received signal.

The Processor and Data Handling Sub-system (PDHSS) performed tracking and the necessary processing of the radar echoes in order to maintain the echo within the radar range-window.

The return pulse shape as a function of time is the convolution of three functions:

Over ocean surfaces, the distribution of the heights of reflecting facets is gaussian or near-gaussian, and the echo waveform has a characteristic shape that can be described analytically, as a function of the standard deviation of the distribution which is closely related to the ocean wave height.

The resulting return puse shape is shown in the figure. In general terms the ocean mode encompasses the following echo characteristics:

Real echoes are composed of the sums of signals from many point scatterers, each with individual phase and amplitude. Therefore, the individual echoes have statistical characteristics superimposed on the pulse shape. In order to reduce uncertainties in the determination of pulse characteristics, the altimeter averages pulses together to reduce this statistical effect. When in ocean tracking mode, the mean sea-level point (mid point of the leading edge) on the time axis is maintained in the centre of the range window. The time interval between the transmitted pulse and this point is effectively the classical radar measurement of range.

From other surfaces the waveform shape does not always conform to the simple Brown Model. The return echo from sea ice appears more specular than that from the ocean and has a peaked trace. The variability of the range measurement is of the same order as that from the ocean and this surface can therefore be tracked using the altimeter ocean tracking mode. The situation is different for continental ice, as the typical return echo has unpredictable shape and more importantly can have a larger variability in surface elevation

An altimeter waveform over continental ice where the typical return echo has unpredictable shape and can have a larger variability in surface elevation.

In order to maintain track of the surface, the Radar Altimeter, in ice mode, benefited from a wider observation window. The required increase in the size of the observation window was obtained by reducing the pulse bandwidth by a factor of four. This solution did not change the intermediate frequency (IF) bandwidth and was equivalent to enlarging the filter bandwidth without changing the filter bank; therefore it did not introduce major hardware changes into the system. In ice mode, tracking the echo of unpredictable shape was achieved by tracking the centre of gravity of the return pulse rather than the leading edge. This technique was used as the location of the centre of gravity is always unique, whereas there may be more than one leading edge, so avoiding any ambiguities.

The main instrument parameters and technical characteristics of the Radar Altimeter are listed below:

The Precise Range And Range-Rate Equipment (PRARE) was a microwave tracking system on board the ERS-1 mission. Read more

ESA OTF dissemination - Maintenance on 18 May 2020

A software maintenance activity affecting the On-The-Fly (OTF) ESA data dissemination service infrastructure has been planned on 18 May. Read more